All Across the World with William Robert Stanek

As a professional writer, William Robert Stanek's work was published and/or distributed by every major US publisher, including Prentice Hall, Simon &amp; Schuster, Penguin Random House, Macmillan, McGraw-Hill, Hachette, HarperCollins, Pearson Education, Cengage Learning, Wiley, and HMH, and over 100 other publishers globally. Of the 20 million words in his professional books, many were written for Microsoft, where they were translated and localized for use in over 150 of the more than 200 countries where Microsoft operates, including:

St. Vincent and The Grenadines

Posted by Robert Stanek at 2:33 PM No comments:

What's Robert Stanek Been Up to?

Around the Town Books is a blog I always meant to get back to but never had time for with all my other writing and publishing initiatives.
My primary blog is Robert Stanek's Books & Things. This blog is where I do most of my actual blogging and it's a popular destination for readers and writers alike with many, many posts and about 100,000 visits.

The other blog I maintain is Read Indies Blog. This blog is also a popular destination for readers and writers alike, including deep insights into publishing and promotion. With over 200,000 visits, it's even more popular than my primary blog. Some few of the posts here are contributed, most are written by me.

Some of the top posts at Read Indies:

With millions of published books out there from authors, there’s no shortage of book promotion sites looking to cash in. Some of these are...

A Tribute to William Robert Stanek, an American Author Who Should Be on Everyone’s Must Read List

My name is Jennifer Blake. This guest post is in honor of William Robert Stanek, an author recently named "an American author who should be on everyone's must read list . . . "

My first book was published by Macmillan in 1995. That bestselling book—Electronic Publishing Unleashed—and it’s bestselling follow up . . .

Finding Success as a Writer and Becoming a Bestselling Author

I'm Robert Stanek and today I'm writing about finding success as a writer and becoming a bestseller. In 1995, I attended a writer’s conference . . .

Book Promotion Sites Ranked & Rated: More Thoughts & Tips for Getting into BookBub from BookBub, Plus 20 Questions & Answers with BookBub

So many have pinged me about Book Promotion Sites Ranked & Rated and asked questions that I added more to the article originally and . . .

A Lifetime of Books – 30 Years of Robert Stanek Books

My name is Emily Asimov. When I heard of Robert Stanek’s lifetime achievement nomination, I jumped at the chance to write a tribute. Robert Stanek . . .

Authors “Writing” Their Own Reviews

I’ve been silent on the topic of authors “writing” their own reviews for far too long. Partly because I’ve been tracking the activities of . . .

Happy Reading!
Posted by Robert Stanek at 10:34 PM No comments:

Why Robert Stanek Talks About His Military Career...

A few changes here before we talk about Robert Stanek's military career. First and most importantly, the Read Indies team is jumping in to help Robert and will blog here and elsewhere on his behalf. Our first official post in the Read Indies blog is posted also @ http://readindies.blogspot.com/2021/07/goodnight-robert-goodnight-moon.html.

Robert Stanek is often asked by readers why he talks about his military career and commendations especially as the subject is so difficult and painful for him to talk about. Robert blogged about some of his experiences here @ http://readindies.blogspot.com/2020/07/memories-of-long-road-home.html and especially about unexpected dangers those in the military face, not in the battlefield, but in the bases where they are housed.

Here's what Robert Stanek had to say about his military career and heritage:

His forefathers fought and bled Red, White and Blue in every war the USA has ever faced, from the French & Indian Wars and the Revolutionary War that shaped our nation to WWI and WWII that saved our world from tyranny to the wars in Korea, Vietnam, Iraq, Afghanastan and beyond. Although many of his ancestors never came home from the battlefield and many others took the battlefield home with them and were never the same again, he's proud of this heritage of service and sacrifice, and he's proud to have served his country in dark hours. His service to our nation taught him a great deal about duty, sacrifice and honor.

Robert says he gave his youth and his health to these wars and conflicts, his family suffered greatly, and yet he would not trade these experiences, for they forged him into who he is today. Because of his service, he says he will always know that when the darkest of hours arrives he will not hesitate. When asked, he answered. When called, he went. When death stared up from the void, he did not fear. He gave because it was his duty and because he felt it was the right thing to do.

His accomplishments during his military service earned me 29 commendations, including the Air Force Distinguished Flying Cross, the Air Medal, the Air Force Commendation Medal, and the Humanitarian Service Medal. When he left the military, he was one of the most highly decorated in the command. The base commander and his supervisors loved it when he put on his dress blues and participated in the various parades and celebrations on base, especially Memorial Day and the 4th of July. Robert says he's met royalty. A crowned prince, a princess of a city state, a queen. He's met and dined with presidents, including George W. Bush and Bill Clinton, and a few generals, including Colin Powell and H. Norman Schwarzkopf. They've offered their hands to shake, given toasts in his honor for his duty. Duty, honor and country mean a lot to Robert, and these themes resonate in his many books.

Yet the main reason Robert says he talks openly about his combat service is to help those who, like him, have taken the battlefield home with them, to give them hope, to let them know that they can use their pain to accomplish many things. He survived a crashlanding, being shot, being stabbed and yet he is still here. "Physical wounds come with consequences, and yet the wounds of war are not always physical, and not all wounds are from combat," he says. "As wounded warriors, we suffer, but we need not suffer in silence." This message of hope in the face of adversity and pain is powerful and heartfelt.

Hats off to Robert for his service and for his dedication to those he served with.

Posted by Robert Stanek at 6:52 PM No comments: 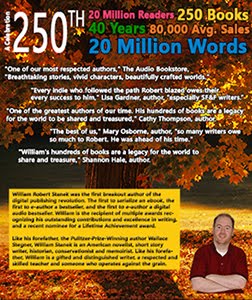 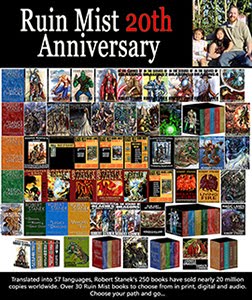 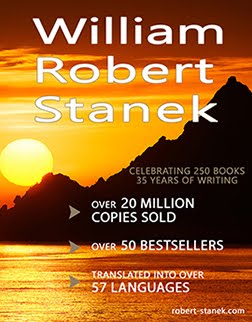 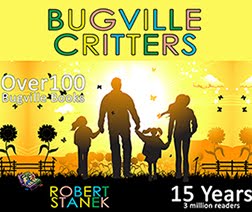